This will likely be the newest game that I cover under the banner of 1ST2H, as Toe Jam & Earl: Back in the Groove was released on 1st March 2019 and played on the same day. Looking at my catalogue, this will probably beat most of the other games. By years…

Some will remember the original Toe Jam & Earl, released in 1991 for the Sega Genesis / Mega Drive, and Back in the Groove is a faithful update. In the original a two-dimensional cartoon alien, either Toe Jam or his friend Earl was controlled by the player. Crossing a series of isometric levels, they seek out pieces of their space-faring boombox of a ship after crashing it into Earth.

Set to a jazz-funk beat, the game was either single player or local co-op, and players traversed the levels while avoiding or being aided by various earthlings. The game had a sense of charm and humour, cracking wise and sloping around the levels with all manner of chill. 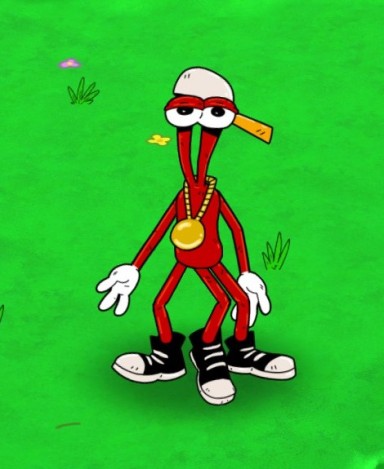 Although sequels were made, fans felt that none were true to the original. But on February 26th 2015 two of the original creators launched a Kickstarter to create just that.  The project was funded through 8,873 backers, of which I was one, and went on to further meet stretch goals that allowed publishing on multiple platforms. I pledged $15.00, enough to get myself a copy of the game on release.

Toe Jam & Earl: Back in the Groove picks up from its older brother, charmingly sticking to the same style and mechanics. For lovers of retro gaming this is a great update that polishes the original with modern graphical advantages without losing its original look and feel. It is a clean spruce up, using enhanced lighting and modelling to make the game feel both new and old at the same time.

One of the things I like about the game is that – other than via temporary bonuses – the characters walk everywhere, they don’t run. It’s all about the Chill, man. The game can be played one player, as either Toe Jam or Earl (or their new friends), or by two players with a split-screen mechanic, allowing separate exploration of each level. Back in the Groove also allows online play, it’s possible to open up your game to allow friends and strangers (your choice) to drop on in. I like the touch of being able to use speech bubbles to talk when in the same place as each other.

I played it with keyboard as I was too excited to dig out my controller, and admit that I initially skipped the tutorial and played the main game. That was a bit of a mistake as the developers have not included a keyboard or controller layout that I could find, so after a short struggle I went back to the tutorial. This is actually a mini version of the whole game structure on easy mode. It drops hints to help you work out what to do, explains the levelling up mechanism, tells you how to use power-ups, and guides you through finding parts of your ship and traversing between levels. I’d say it’s a good idea to play this first.

The tutorial also shows off the game’s mischievous sense of humour, reminding you to keep your eyes peeled, even if you are being chilled. I unlocked the ‘Fool me twice’ trophy pretty early on, and now glare at elevators when I get into them. The tutorial took about an hour and twenty minutes to complete, though you don’t have to stick to the end – I dragged it out by exploring each level fully. Going back into the main game, the difficulty change is quickly apparent as are new NPCs. The tutorial is only a basic version of the game.

And the music! I have the PC version, so played with my headphones off and my amp turned on. This game has funky, funky bass, and I’m sure my flatmates are now a bit annoyed with me. Man, the funk. The tunes got a touch repetitive on the tutorial, but there were more tracks being played in the background on the main game, so I’m sure there will be plenty more over the course of the play-through. This is one you play while bobbing along in your seat, grooving to the tunes as you stroll around the level being a dude.

Earthlings found throughout are either friendly or hostile. Some will aid you; healing or fixing things, levelling you up, or going on the offensive for you. Others, of course, are hostile, and play off fanciful tropes or stereotypes. Thirty years of changes to our world has introduced a new range of stereotypes, and the drone-flyer is a particular new nuisance. But it’s good to also see old friends in there, including the not-hostile-but-totally-problematic Hula Girl. I like that even though she can really mess with your progress, your character and her will still call hello to each other when they pass. They get each other: they both dig music.

At £15.00, this is a good purchase. It will be the type of game you can just pick up and play for a short while or something that you can also sit down with for longer sessions. I gather levels are procedurally generated and it has multiple difficulty levels. Alongside the co-op play that should welcome replay without getting stale.

I’m not one to say whether a game will be successful or not, but I do hope to hear buzz about this title, especially among those who recall the original. But I also hope that the game finds new fans, re-establishing its well-deserved place in the collective memory of the gaming world.