Oh wow. Oh boy, oh boy, oh boy, oh boy, oh wow. I’ve not had a game hit me like this one did in a long time. It had me smiling, appreciating the vistas in front of me; it had me cringing at the height of drops below me; it utterly entranced me with the musical score. It engaged my imagination as it evoked a sense of wonder and curiosity, and it made me think as I tried to solve the many puzzles in front of me.

Rime is a single player adventure/puzzle platform game, built-in the Unreal engine. You control a young boy through a mysterious and partially ruined island, solving puzzles and exploring as you seek to further unlock the story of why you are here – and what ‘here’ actually is. Or once was.

There is no written narrative to get you going, and no voice acting beyond the humming and shouting you can make your character perform. The story unfolds via visual clues on walls or other revealed imagery. Controls (either via keyboard and mouse or controller) are kept beautifully simple: run, jump, duck/roll, climb, swim, manipulate object and shout at object. That’s roughly it, but is more than enough to resolve challenges as you work out how to get from where you are to where you want to be.

The game is apparently split into five large levels, and in the two hours of game time I just about cleared the first level (I then played on into the second at the expense of sleep – but this piece is still only about the first two hours). You are guided in a relatively linear format from puzzle to puzzle by a spirit-like fox that you befriend, and can either go straight to each new puzzle – usually a manipulation of the island and its buildings to open an access route – or you can root around for a while, seeking to find hidden trinkets.

Rime is a beautiful game. It is cel-shaded to great effect, giving the game a cartoon-like feel. The island is a gorgeous tumble of hills, outcrops, shore and ruining buildings, with something of a Mediterranean/Greek feel to the first level. The developer, Tequila Works, are based in Madrid; which isn’t likely to be a co-incidence. The score is just beautiful, and while I couldn’t place most of the inspirations behind it, I definitely felt some of the Ghibli wonder and emotion in there. The music give an ethereal and mournful, yet hopeful, feeling to those first few hours of play. Just check out the launch trailer for a feel of this amazing music. I just can’t explain it well enough myself:

The game is lit so well, too. As you explore, a day and night cycle gently rotate overhead, giving the game warm days, cool nights and those lovely time-between-times of dawn and dusk. The star field at night will make you pause in wonder at least once. Probably more than once.

Not knowing anything about Rime before playing it almost felt, as I came to the close of the first level, that perhaps this was a short game in which the replay value was finding the hidden trinkets. The story seemed to be coming to reveal, and the building crescendo had me running happily towards it. But I’m glad that it quickly showed me that oh no, there is a lot more to do. I think that may have been the intention, getting the player in harmony with the hopeful excitement of their character. The transition into level two perfectly pierces the forlorn tranquillity of the first level, revealing that there is definitely a lot more to go.

Throughout the first level the fox is a welcome companion that shows up periodically, yipping from vantage points to give you a clue about where to go next. But there are also other characters that inhabit the island, including a red-cloaked figure that you spot silently watching you from afar, sometimes. It must significant, as you own character has a ragged scruff of a red cloak, too – clearly important by the way it contracts with the rest of the game’s colours. 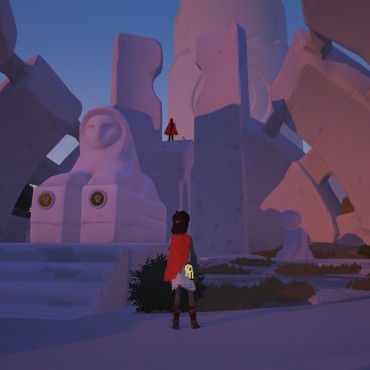 There are other observers, ones who seem to watch you with great interest from the shadows. They reminded me of Ghibli’s Kodama, the tree spirits. Though they a little more sinister looking, shrouded as they are in black, and seeming to hiss and mutter as you pass. But they seem to just be observers, for now. The trailers show a mechanical ally can be found in a later level.

Adding to the natural and uninhabited feel of the island, it is populated with a lot of little creatures that run around as you explore. There are birds, boars, [small furry things that I couldn’t identify], fish, starfish, and – my favourite – little geckos that scruffy along walls. They are co cute. Totes adorbs.

The first level of Rime can definitely be completed in less than two hours. Two puzzled shamefully stumped me for much longer than they should have, especially when the solution – when I finally worked it out – was just so obvious. Sometimes, I would advise, it is better not to over think the puzzle, and just do what it looks like you are supposed to try, even though it clearly wont work. Because sometimes it does. The island of this game, you have to keep in mind, is a somewhat magical place.

I played hard-to get with Rime, only picking it up when it showed up in a Steam sale (I love adding stuff to my Steam Wishlist and then patiently waiting). At time of writing, it retails at £29.99 on Steam, and on Amazon it is £23.79 for PS4, £13.30 for Xbox One and £20.14 for Switch. Looking around a bit on price is definitely something to explore as it is hugely varied, and you’re in a good position if you have multiple platforms you could elect to buy it on.

The game was well received, won awards for its music, and is great to play.