The written version of a sci-fi ensemble show that you might find on Netflix, this is a novel that I didn’t know I needed. Following a small ship-board crew as they complete a job, it is full of world-building lore and fantastic detail. It offers up a joyous insight into the tiny shared community that lives, breathes, and works together in their little spare-borne machine.

If you’re a fan of the TV show Firefly, you’re probably going to like this book. The author absolutely nails the feel of colleagues that are as much family and friends as people who work together, something last felt when Joss Whedon’s sorely-missed show lit up the space-lanes. The story focusses both on the interplay of characters and the resolution of the overall plot, dwelling contentedly on the minutia of the day-to-day life and relationships on board a long-haul working space-ship. 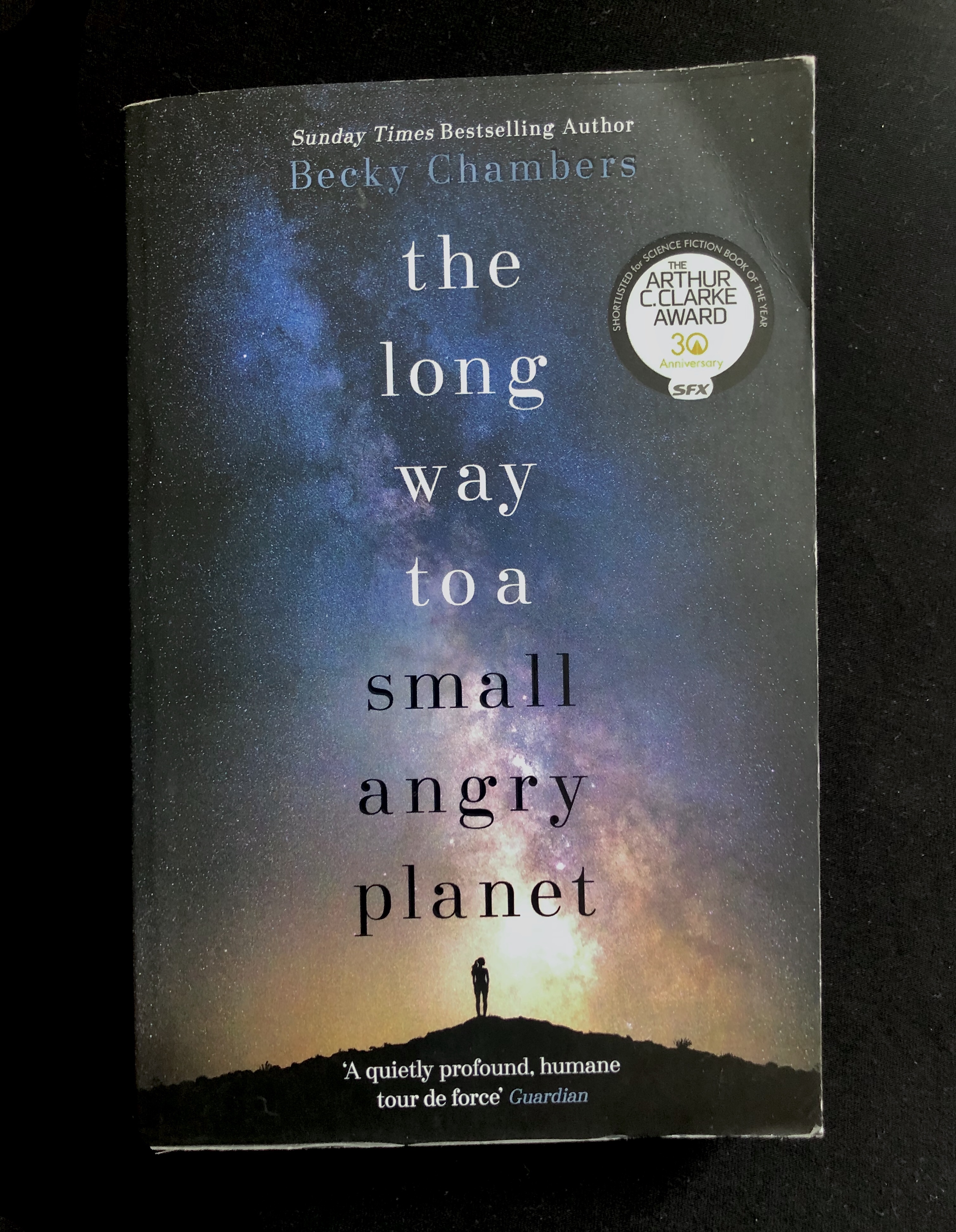 The ship they all live on, Wayfarer is Captined by Ashby Santos; part owner, manager, captain, and friend. He keeps the crew concentrating on the job at hand, but also has an open heart when it comes to ensuring their well being and safety. Perhaps this is a fairly standard ‘captain good guy’ characterisation, but he is delivered well, and I didn’t mind. Being focussed on the job, and not being pressured by issues of criminality, the author is able to allow him some independence from the ‘handsome rogue’ archetype that often accompanies this sort of character.

Within the universe that is imaginatively built by Becky Chambers, the Wayfarer is something of a mobile drilling rig. Sent out into the depths of space by speculative corporate contractors, the Wayfarer is to travel it to a a distant point in space, then set up a gateway and return via wormhole. Wormholes, in this universe, are unstable, and so the first outward journey to a destination is contracted to those willing to undertake it, setting up a stable return route from the destination. Once this is established, future journeys by commercial parties are able to travel directly and much more quickly. The mechanism gives reason for the story to concentrate on the long journey and the team of loners, misfits and isolationists onboard the ship – building to arrival at the ultimate destination and then the return.

The onboard community, and the wider setting of the novel, explores a collection of different personalities and species. Not all of the crew are human, and each is given a grounded and unique perspective on their place in the galaxy and onboard the ship itself. Even the ship itself is a character, infused as it is by an onboard Artificial Intelligence system, called Lovelace. A nice sense of perspective, and a counter to the mostly-human crew, is offered by noting that within the setting of the story, humans are in fact something of a junior partner in the coalition of alien life forms that dwell among the stars.

Each character, human or non-human, is given a personality, complexities, motivation for being present, and a history. They are also given a series of intriguing half-hidden truths and subjective beliefs, allowing pressure to build during this particular journey; one that is longer, more lucrative, and higher profile that usual. This allows the only-just-held-together balance of the crew to unravel over the course of the book, with parties discovering more about each other – and themselves – than expected.

If there is one complaint to be had about The Long Way to a Small Angry Planet – and it is only a small one as the book really is great – it is possibly to be found in the unusual way it came about. I love that it was self-published, and that it gained popularity via kickstarter that allowed the author to pick up a publishing deal. But I do feel the novel starts as a stand-alone story, and changes tone at around the half-way point, deciding to become a series. I suspect (entirely speculatively, this is just an impression I got) that this happened as it gained traction and feedback during the writing process.

Threads of storyline that looked self-contained at the start shift in feeling, looking to become multi-book plot points, which wasn’t what I had hoped for at the start of the novel. Then there is a huge and – while skilfully and thoughtfully detailed – unnecessary information dump about threes quarters of the way in, where the story swings to one side and the home planet of one character. While it undoubtedly adds value to the backstory of one intriguing non-human character, it feels very much like content and word-count padding exercise and really slowed the pace of the story.

The story wound up in a manner that made me want more – I have picked up the second book and am reading it at the moment – but a little disappointed that I needed to read more to see how some of this story pans out.

Nevertheless, I would recommend this to others, and am enjoying the follow up A Close and Common Orbit. I will likely pick up the third in the series, too. This is a great new universe to explore, and is totally scratching my geek-needs. I look forward to reading more by this now-established author.