Got a couple of hours to kill? Got a list of unplayed games you’ve been meaning to get around to? 1ST2H looks at the first two hours spent playing a new game.

Civilization VI: turn-based empire building that spans the ages. Cartoon-like design and a friendly interface ease the way into complex mechanics and a very long to-do list. Much as years blink past in-game, so do hours, outside of it.

The popular predecessor to Civ6 has been languishing in my to-play pile for a couple of years. Lately, the endless hours of isolation in Lockdown presented the perfect opportunity to finally fire it up. Of course, then, I didn’t. Instead, I just played Civ6, the newer game that was recently given away for free on the Epic store. Sorry, #5.

Released on PC in 2016, Civ6 represents the latest game in a franchise stretching back for two decades. It is a 4x game, meaning [checks notes] Explore, Expand, Exploit, and Exterminate. As a regular Reddit lurker, I’m aware of the board strokes behind the Civ series. I know that you try command an empire from old-world settlement to continent-spanning space-exploring nation. This is done through resource gathering, trading, warfare, politics and research.  Being no more familiar than that, though, I opted to play the tutorial, rather than the game-proper. It, nicely, took me two hours, though I’m certain that a player familiar with the franchise, or someone with less patience for the soothingly voiced commands of the tutorial, could complete it sooner. 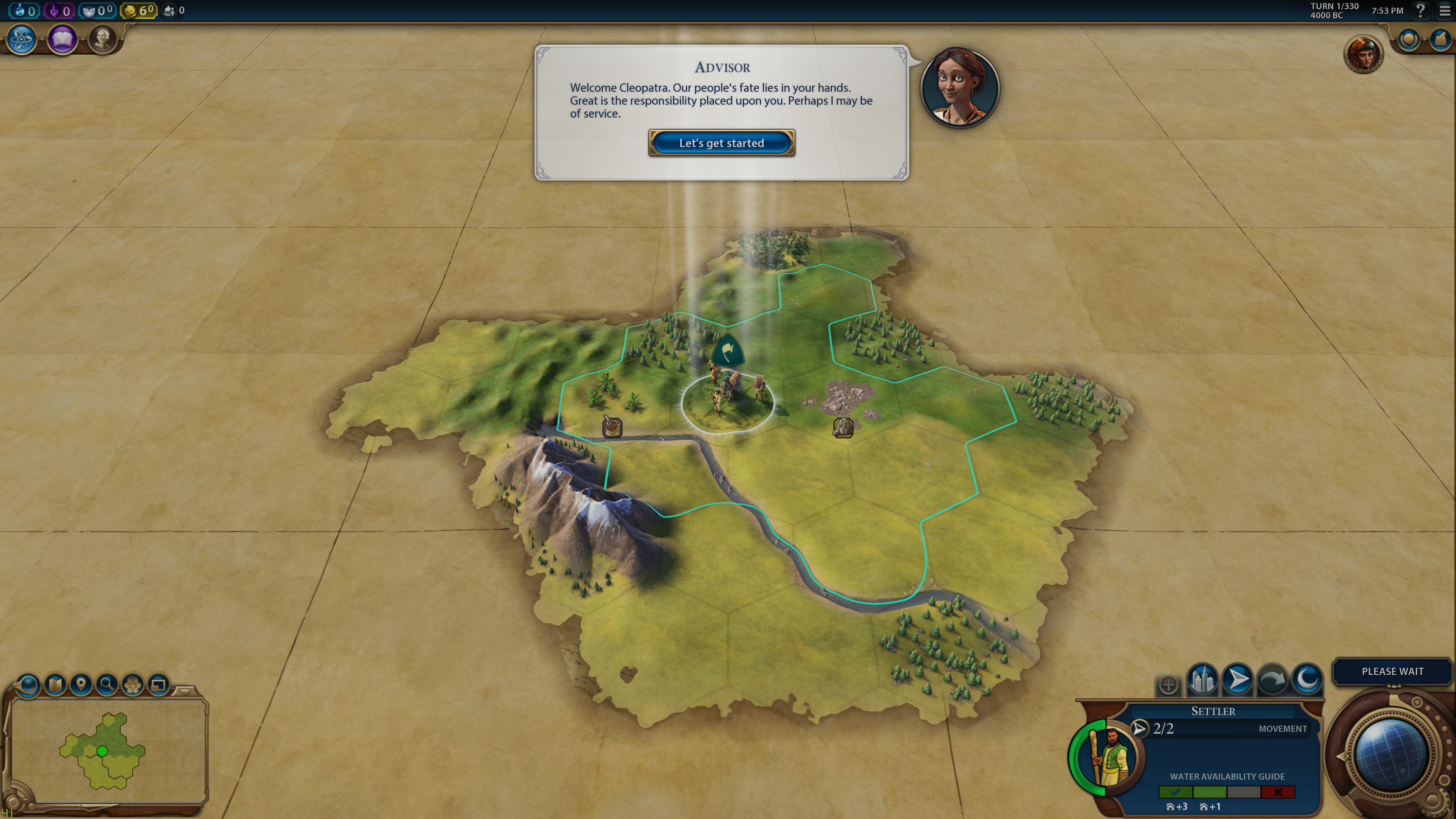 A turn based game, in the tutorial I played [checks notes] Cleopatra, up against [checks notes again] Gilgamesh. A few seconds after starting I forgot to take any further notes at all, as I became too absorbed too quickly – definitely a good sign.

Within the game, you chaperone your burgeoning civilisation through the ages, playing as famous characters from our own history. You nurture your people by exploring and exploiting hexagonal tiles on a map, utilising resources to feed your population and help them grow in number and capability.

Over the turns of the game, you are presented with the ability to develop arts, culture, science, politics, religion and military, all through lengthy skill-trees that require multiple turns of the game to undertake. You will use each of these to increase your population, your prowess, and your control of the map. You are not alone, out there, for there are other young nations sharing the in-game world and you will need to compete with them to become the pre-eminent civilisation. In each turn of the game you move your citizens and armies around the map, develop tiles, grow your borders and complete research. Then the opponent gets a turn. The game moves back and forth in that manner.

The game opened with a beatifically rendered cut scene that emphasises all of this, in a swirling visual movement through time, follows a father and a daughter as they represent the struggles of people through the ages. The tutorial then starts with a second, simpler scene, helping you understand your mission.

For the first hour, the tutorial helpfully guides you through the steps involved in exploring your map, advancing your settlement, and defending it against others. It isn’t hard to follow along and the tutorial patiently repeats actions until you know what is needed. Eventually it steps back and points you at the final goal, then leaves you to it. By this point the task should be understood and manageable.

As mentioned above, the game is drawn in a cartoon-like style, and feels a lot like an animated boardgame. In this way, and due to the friendly nature of the tutorial, it is a welcoming experience, letting you dip your toes into a more complicated world. The first challenge isn’t too tough, and the interface isn’t too complex.

The sheer length of the research trees available, along with the in-game details around how units unlock, their abilities, and how they influence each other, reveals that there is a lot more to this game. I can see that at its more advanced stages it must be a complex and deeply rewarding game to play, as you grapple to master the range of options available to you.I barely touched on governance, trade, seafaring, religion or philosophy mechanics, yet I can see there is much to each of these.

The AI in the tutorial wasn’t especially smart, but this was obviously deliberate – it’s a tutorial, after all. I played on ‘Prince’ setting, which I think is about medium, and I’m sure that once I fire up a proper game I will be met by much tougher and more devious opponents. I expect a drubbing. The game also allows multiplayer, including both online and local network play. Once I’m brave enough to dare them, I’m betting that will require a whole new skill level, and quite a lot of humble pie.

It was two hours well spent. I’ll be back to play more of it.